In a previous post, we measured that compressing large JSON documents before sending them to redis was faster than sending them as is. I made the measurement on my own computer and a local redis database.

Now that the principle has been validated, I needed to know if this result could be replicated on an environment that is closer to the production environment we have at Forest Admin.

On a server, I ran the same benchmark:

In this first graph, we will compare the download performance from redis + decompression time of the same JSON documents, using 3 different methods:

These algorithms appeared to be the fastest in their family during my first tests. This second test on a production-like environment revealed the same, that’s why I decided not to publish the same level of info as the last time. 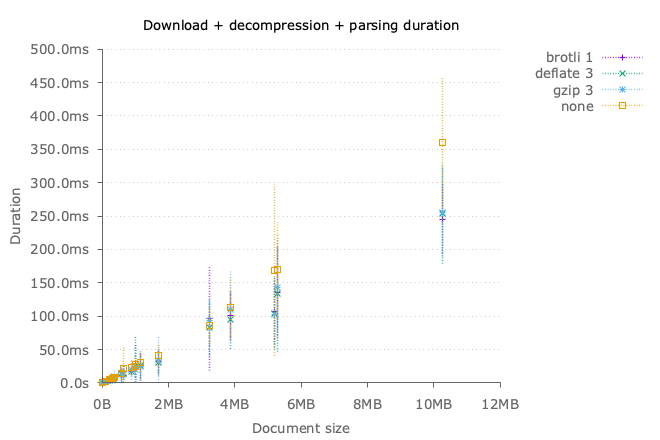 Performances are really similar to documents smaller than 4 MB, but the difference starts to be significative after this value.

For larger documents, all compression methods have similar performance regarding the time it takes to download and decompress them.

The same protocol has been applied, for all algorithms. As for the download performance comparison, we will compare here the same challengers that have been selected in the previous test. 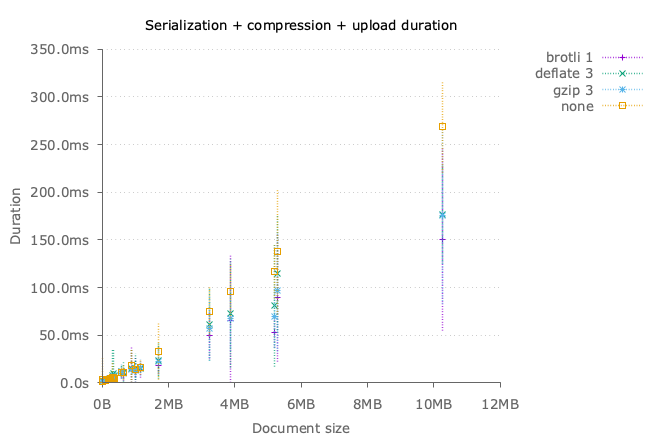 When writing JSON documents larger than 4 MB, results show that it is worth compressing them. For documents with a size of 10 MB, the overall compression and upload time can almost be divided by 2 with this method, from less than 300 ms to 150 ms with brotli-1.

🏅 Brotli-1: the winner in production-like environment

This second test shows that the algorithm brotli-1 makes a significant difference regarding the upload and download performance of documents larger than 4 MB.

At Forest Admin, we need to store some JSON documents that are larger than 4 MB, and we will definitely try this solution in production, using a canary deployment.

The space saving ratio of the brotli-1 algorithm has been measured to be more than 90%, on the types of documents that we are storing. So, in addition to allowing faster data transfer, this solution will also save a lot of space on our redis instances.

⚠ Be sure to test the algorithm on a production-like environment

Be careful before using this solution in your own environment, because results can vary a lot with:

For instance, brotli with the default compression level is very effective in terms of space saving, but also very slow during the compression phase.

When testing in a production-like environment, some algorithms have also been measured as slower than the original solution, which consists of sending the plain JSON documents, as you can see below. 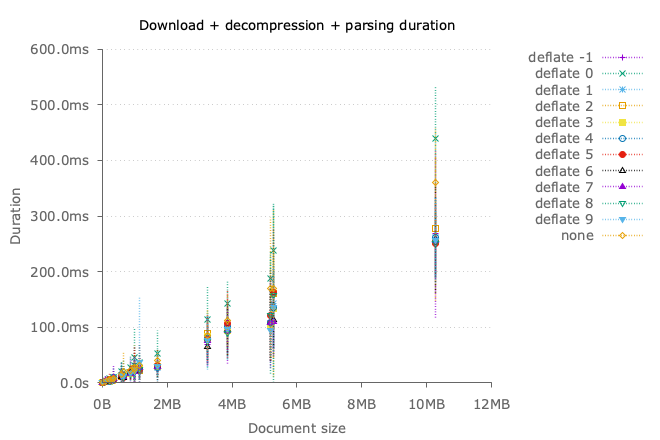 Compressing documents with deflate and a compression level of 0 was faster than using no compression on my laptop, but became slower on a real server.

Your email address will not be published. Required fields are marked *

You May Also Enjoy

Large documents in redis: is it worth compressing them (Part 1)

At Forest Admin, we build admin panels for which we need to compute and cache large JSON documents. These documents are stored in redis and retrieved from th...

Git tip: get back to work after a revert on master

Extract-Transform-Load with RxJS: save time and memory with backpressure

Let’s say that you have to extract 100M objects from a database, make some transformations on them and then load them into another storage system.

Here it is: a new fresh blog, built from scratch, and with some new content (hopefully). The paint is still fresh, and things are not perfect yet, but as usu...